Mission Statement: Enhance the livability of the Santa Fe neighborhood, create and support neighborhood improvement activities, and represent the interests and concerns of neighborhood residents and businesses.

Brought to you by the Public Safety Committee

Fifty concerned citizens attended each of the two public meetings A.C. Transit held on Jan. 9 and 11, 2016. At the latter hearing, Vice-Mayor/Councilmember-At-Large Rebecca Kaplan presented an alternative to AC Transit’s four proposals – Alternative 5 (see below). This alternative meets both objectives: keeping service in North Oakland while increasing service in Emeryville. There was a unanimous vote for this alternative. Several people pointed out that both areas have increased development and growing populations and that service needs will only increase in the future.

WHAT YOU CAN DO:

Thank you for supporting your community and fighting to retain the F bus. 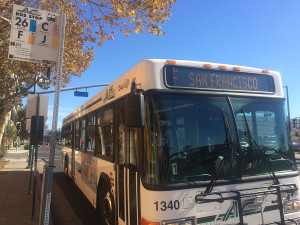 Due to the pressure exerted by our petition, A.C. Transit has responded by taking two actions:

Brought to you by the Public Safety Committee

Thanks to the 570 emails generated from our petition to oppose changes to halt service to the Santa Fe and Longellow communities and parts of Emeryville, A.C. Transit is not taking any action until next year.

At their Dec. 9 meeting, the AC Transit Board of Directors will receive a status report on the project (Service Expansion Plan).  … In addition to a delay in the vote to approve the changes, a number of proposals are being further delayed and thus removed from the plan and from that vote in January. This will allow AC Transit staff to conduct additional outreach and to work with the affected communities. Those lines that will not move forward as part of the initial SEP process are:

Our Public Safety Committee is meeting with other stakeholders to outline our next steps.  Stay tuned!

I am happy to report that as of December 1st, we have garnered 570 emails to the A.C. Transit Board of Directors. Signers include residents from the Santa Fe, Longfellow, Golden Gate and Bushrod neighborhoods, other parts of Oakland and the affected communities of Emeryville and South Berkeley.

On November 29th, the following email was received from A. C. Transit’s General Manager Michael Hurst:

“Thank you both (Councilmembers Dan Kalb and Rebecca Kaplan) for your participation thus far in our Service Expansion Plan. As you may be aware, our Board of Directors held a public hearing this past Wednesday, November 11th during which they received a large amount of public comment regarding the changes being proposed as part of the service expansion plan. Both during and before the hearing, our Board received concerns from North Oakland residents about the proposed changes to the F and J lines.

I’d like to inform you that the Board did not make any decisions last Wednesday and instead directed staff to further analyze the public comment received, to look at alternatives to some of the proposals – including the proposals for the J and F lines, and to conduct further public outreach for the F and J Proposals…. (O)ur Staff recognizes the need to begin quickly the process to develop alternative proposals and materials. This effort will require additional public outreach.

(G)iven the short timeframe to begin SEP implementation and the need to conduct meaningful outreach, I have proposed to our Board of Directors, that we table the changes to the F and the J lines to allow additional time, beyond January, to further refine the proposals for the F and J lines. Under this scenario, we are looking to conduct focused outreach in January and bring back to our Board a refined proposal for the F and J lines in the spring of 2016. The remainder of the SEP will still go forward for Board approval in January.

This allows us time to engage with your constituents in a more meaningful and productive manner. As such,…. you may wish to consider postponing until January, in order to allow the planning staff to adequately prepare alternatives that could form the basis for discussion at such a meeting….

Thank you, and we look forward to working with you and your constituents. Please do not hesitate to contact me if you have any questions.